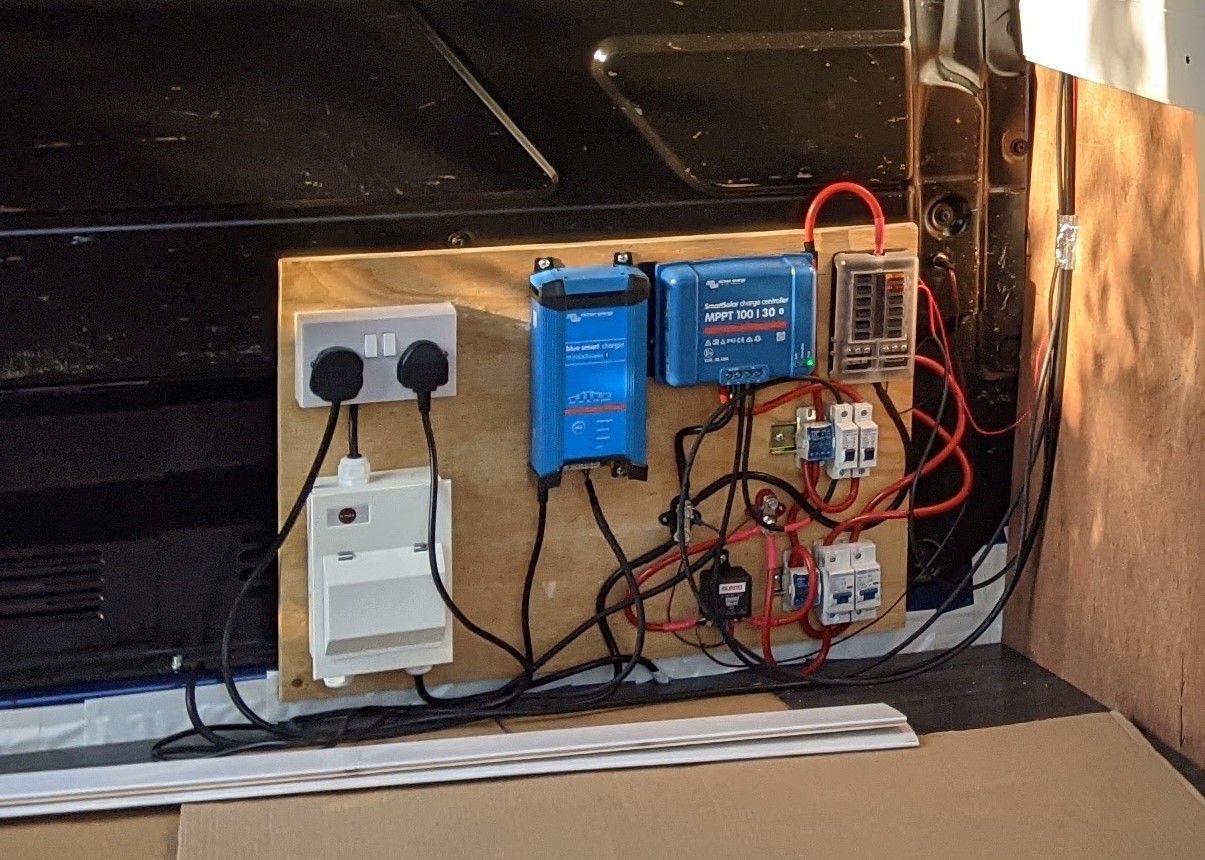 Electrickery is very much not my area of expertise, so as well as my vague descriptions for the systems we decided to install in our van conversion project, I have also asked Mr. Wombat to draw out a circuit diagram. This is included at the end.

When we scoped out how we would use the van, a few things stood out as being necessary to make it work for us when it came to electrics:

After much research and weighing up of options, this translated into a shopping list that looks something like this:

Most things in the van run off a 12v circuit powered by the secondary (leisure) battery.  The only exception is a double socket (with USB and USBC sockets integrated) and the underfloor heating,  both of which are connected directly to the 24v mains circuit and only run when we are hooked up on a campsite.

Leisure battery. I am calling it a leisure battery, but in fact we are experimenting with a second automotive battery, so it will fit under the driver’s seat next to the normal starter battery. A more traditional leisure battery is larger and more expensive, but I suspect would also have longer lifespan, so this may well be something we need to test for a while and adjust in the future if required.

Solar Panel & Charge Controller. We basically went for the largest panel we could fit on the roof between the aerial and the roof lights (when open). This turned out to be a 385w panel, which also claims to be more effective in generating energy in low light conditions than some other panels. In order to mount this panel on the roof, we designed a frame out of standard aluminium extrusion and sliding fixings which picked up on the mounting points in the roof designed for fitting a roof rack. We chose 40mm section extrusion so the panel could sit inside and slightly sub-flush. Fitting the frame was actually one of the trickiest parts of the whole build as it needed to be spaced off the roof to allow for the curve of the roof at its highest point in the centre, the holes through the frame had to be accurately located over a large distance and the mounting points needed to be sealed. This took quite a bit of fettling, as we only had handheld power tools, as lifting the assembly up on to the roof was no simple task either. Once the frame was right, we then had to cut access holes in the right position in the roof to allow the connections for the panel to the electrics inside and seal those entry points with glands.

The 24v inlet we mounted underneath the van on the drivers side, to keep it tucked away and hopefully make it more difficult to forget we are plugged in, as we have to step over an orange mains cable when getting into the cab to drive away. This location is also close to where we have located the electrics inside the van to minimise cable length. It does of course mean another hole needed to be cut and sealed with a gland, but being under the floor reduces the risk of a leak. The 24v inlet cable connects to an RCD for safety reasons and both the double socket and heated floor are plugged into a conventional socket (also mounted on the board with the rest of the electrics), so both can be isolated using the switches if required.

The 12v fuseboard and circuit is where everything else is connected.

We went for a Dometic CRX50 12v compressor fridge and the best price at the time was through Jackson Leisure. It is very quiet, although I do sometimes hear it coming on in the night. So far we have only used it with the freezer box removed, and after a few days it does get a bit wet inside and needs to be wiped out. It is possible to fit a drain into the bottom of the fridge, but we preferred to wipe it out occasionally rather than have added complication in finding a way to connect the drain outside the van or collect it somewhere.

The lighting consists of 6 x recessed spotlights in the kitchen area, 2 flexible reading lights either side of the sofa / bed and around 80 individual LEDs recessed in the cladding above the sofa / bed area. The photos below show the LED lighting looms in construction and attached to the ceiling before the cladding was fitted – yes, those individual LED looms did take as long to make as it looks like they might, but I think it was worth it. I did buy the LEDs with the wires already attached, but the spade terminals had to be attached one by one.

The USB socket connected to the 12v circuit is to charge phones while we are off grid. We don’t anticipate needing to charge too many devices from this on a regular basis, so opted for a small socket with integrated battery charge level indicator.

The water pump is simply dropped into the plastic water container under the sink. We bought ours as part of a kit with a tap from a seller on Ebay, but the same whale pump is readily available separately.

The full van circuit is connected as shown below:

Once we had all the wiring in place and solar panel, lights, sockets, fridge and heated floor connected up we could finally get on with the cosmetic part of the build and actually get some furniture in……

Check out the ‘About‘ page to find out a little about me and my journey, the ‘Freedom Fund‘ page to see how our investments have grown over time and the ‘Camper Van Conversion‘ page to follow how we are getting on with our latest project.